Bakes on Mesh is a feature that allows system avatar baked textures to be shown on mesh attachments.

What’s a baked texture and why would I want it on Mesh?

If you use a standard system avatar, you can wear several texture layers to customize your skin and add tattoos and clothing layers. To save processing time and provide everyone on any system the same view of your appearance, those textures are “baked” by a server into a single combined texture. That’s great, but until now if you want to use a custom mesh body part it would need its own texturing system to provide a similar ability to customize its appearance. In addition, you usually need to apply an “alpha” texture to the underlying standard avatar body part to hide it so that it doesn’t interfere with your custom part.

With this new viewer feature, you can apply any system skins and other layers to your avatar (you don’t need or want the alpha layer), and then tell the viewer to apply the resulting baked texture to your the mesh body part; the underlying system avatar part that would otherwise have gotten those textures is hidden for you automatically.

There has been some discussion about mesh avatars, and how they are often not as well optimised as they could be, impacting on perfotmance. Steps are being taken to produce better optimised mesh avatars, such as Ruth 2.0. Bakes on Mesh may help with some of these issues, even if it forces creators to have another look at their current offering in the context of updating it to be compatible with BOM.

Bakes on Mesh is not without issues, many of which can be found here.

Getting started with Bakes on Mesh (BOM) 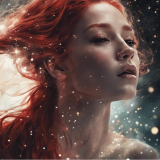